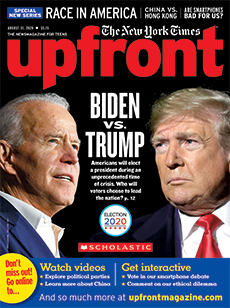 Should the Supreme Court Be Televised?

Television cameras have followed the president around for as long as there’s been TV news. And C-SPAN has provided live coverage of Congress since 1979. But the third branch of the federal government, the Supreme Court, remains a camera-free zone. In fact, the Court doesn’t even allow still photographs to be taken during oral arguments, when the Court’s nine justices hear cases and question lawyers representing both sides. The Court does release audio recordings of oral arguments, but usually not until a few days after the arguments are over.

In a world where just about everything is documented on video, some are wondering whether it’s time for the nation’s highest court to allow cameras in the courtroom. Two experts weigh in.

The current Supreme Court term could be one of the most important ever. The docket includes cases involving voting rights and the dispute over whether a baker who opposes same-sex marriage may deny his services to a same-sex couple. Both of these cases are of immense interest to the American people and were argued in open, public hearings. But because the Court won’t allow cameras in its courtroom, it was impossible for most Americans to watch the debate. This blackout is shameful and deeply problematic.

The justices are public officials whose salaries are paid by the taxpayers. The only times the justices appear regularly in public performing their official duties are during oral arguments and when they announce their decisions. Televising these proceedings would allow Americans to see the Court at work and watch the justices tackle vital issues while remaining civil and polite—a positive example in such a partisan era.

Law professors could use videos of Court proceedings as important teaching tools. Museums could display the most important arguments for historical purposes.

The justices are public officials paid by the taxpayers.

Televising the Court would also provide an opportunity for the American people to gather as engaged citizens, as they do, for example, when the president addresses Congress. Not televising the Court reinforces the myth that its deliberations are beyond the understanding of ordinary Americans.

Every state and many other countries now allow cameras in their courtrooms, and there’s no evidence that it leads lawyers and judges to showboat, as some worry. Some justices have voiced concerns about their safety if they appeared on TV. But considering how much information about the justices is already available online, it’s unlikely that TV would cause additional security risks.

The Supreme Court’s refusal to televise its hearings reaffirms the false idea that it operates in a rarefied, nonpolitical arena. It’s well past time to put cameras in the Court.

We live in tumultuous political times. Polls show that many Americans have lost faith in Congress and the president, but not in the Supreme Court. The Court continues to command respect by focusing on legal arguments during oral arguments and explaining its reasoning in carefully written opinions. Unlike the other two branches, it has been slow to adopt new forms of communication, such as cameras or social media. The Court is wise to be cautious about embracing new forms of communication, especially those that encourage style over substance.

Cameras pose several dangers to the proper functioning of the Court. For one, cameras change behavior. Lawyers and justices would think about how they appear, and commentators would focus on gaffes and idiosyncrasies. We live in a digital age, and once images appear, they can go viral and be replayed forever online.

Cameras in the courtroom would make the justices’ jobs harder.

Proponents of cameras in the courtroom argue that the only way for people to learn about how the Court works is to watch oral arguments on television, but that’s not true. Members of the public can listen to the audio of the arguments or read a transcript of them on the Court’s website. They can even attend oral arguments in person.

Bringing cameras into the Supreme Court would make the justices’ jobs harder without making their work better. We shouldn’t do it.

What do you think?
Should the Supreme Court Be Televised?
Thank you for voting!
Voting has ended. See final results below.
Results
See results Hide results

What does your class think?
Should the Supreme Court Be Televised?
Thank you for voting!
Voting has ended. See final results below.
Results
See results Hide results