Home > > A Failed Attack on Democracy 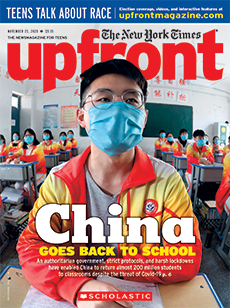 Rioters try to break through a police barrier in front of the U.S. Capitol in Washington, D.C., on Wednesday.

A Failed Attack on Democracy

A mob of President Trump’s supporters, encouraged by the president himself, stormed and occupied the U.S. Capitol on Wednesday, January 6, disrupting the final count of electoral votes from the November election in a display of violence that forced members of Congress to evacuate and take shelter.

But in a remarkable demonstration of fidelity to America’s democracy, members of the Senate and House of Representatives returned a few hours later, after police had cleared the Capitol of rioters, and early this morning Congress confirmed President-elect Joe Biden’s victory.

“They tried to disrupt our democracy,” said Senator Mitch McConnell of Kentucky, the Republican majority leader. “They failed.”

Vice President Mike Pence and House Speaker Nancy Pelosi preside over a Joint session of Congress to certify the 2020 Electoral College results, after police clear the Capitol of rioters.

President Trump, who spent months stoking the anger of his supporters with false claims that the election was stolen, didn’t condemn the violence on Wednesday. But early Thursday he said for the first time that he would respect the results of the election and that “there will be an orderly transition on January 20th.”

The statement came moments after Biden’s victory was certified shortly before 4 a.m. by a joint session of Congress presided over by Vice President Mike Pence. (On Thursday evening, Trump posted a 2½-minute video on Twitter denouncing the mob attack and acknowledging that “a new administration will be inaugurated on January 20.”)

On Wednesday afternoon, rioters forced their way past Capitol police, smashed windows, vandalized Speaker of the House Nancy Pelosi’s office among others, looted art, and briefly took control of the Senate chamber, where they took turns posing for photographs with fists up on the dais where the vice president had just been presiding. Some of the rioters carried Confederate flags.

Presidential historian Michael Beschloss called the violence “a terrorist attack on our Congress.”

The chaos in the Capitol was unlike anything the nation has ever experienced. Around 2:15 p.m. on Wednesday, as the House and Senate debated an attempt by a faction of Republican lawmakers to try to overturn the election results, security rushed Vice President Pence out of the Senate chamber, and the Capitol building was placed on lockdown after pro-Trump demonstrators surged past security barricades and law enforcement toward the legislative chambers.

For a time, senators and members of the House were locked inside their respective chambers or sheltered at undisclosed secure locations nearby. Images posted on social media showed scenes of rioters tussling with the police as at least one protester took to the rostrum of the House chamber to declare his support for President Trump. A Capitol Police officer died from injuries suffered battling rioters. One woman who was among the rioters was shot inside the Capitol and later died from her wounds.

“I thought we’d have to fight our way out,” said Congressman Jason Crow, Democrat of Colorado and a former Army Ranger in Iraq, who found himself captive in the House chamber.

The rioters had come from a rally in front of the White House at which President Trump continued to falsely claim that he had won the election and vowed “we will never concede!” Trump had told his supporters that they should “walk down to the Capitol,” where Congress was in the process of certifying Biden’s Electoral College win.

In the two months since the November 3 election, Trump has repeatedly made false claims that there was widespread election fraud and that he actually won. These claims have been rejected by state election officials, both Democrats and Republicans, and by federal agencies that monitor election security. Dozens of lawsuits challenging the election results have been rejected by courts, including many by Trump-appointed judges.

Police cleared the Capitol of intruders by 5:40 p.m. and lawmakers quickly returned to resume the electoral certification process. Upon their return, Republicans and Democrats locked arms to denounce the violence and express their determination to carry out what they called a constitutionally sacrosanct function.

Under the Constitution, Congress meets after every presidential election to count votes from the Electoral College and announce the winner. It’s usually a ceremonial exercise, since results have already been certified by all the states. But this year, a group of Republican lawmakers, prodded by President Trump, tried to derail the process by refusing to accept the results in several swing states that Biden won. Their objections were dismissed by majorities of both houses of Congress.

“Joe Biden won the election. It’s not what I had hoped for, but that’s what happened,” said Senator Pat Toomey of Pennsylvania, a Republican, urging his colleagues to accept the results.

“If this election were overturned by mere allegations from the losing side, our democracy would enter a death spiral,” Senator McConnell said, arguing for why the Senate must certify the election results in order to preserve American democracy.

President-elect Biden condemned the violence and he suggested, as many Republicans and Democrats did, that President Trump was responsible.

“At their best, the words of a president can inspire,” Biden said. “At their worst, they can incite.”

Like many others, he made clear that the rioters didn’t represent the vast majority of Americans. He reiterated his plea to restore decency and respect to politics, bring Americans together, and unite the nation. “There has never been anything we can’t do when we do it together,” he said.

The violence in Washington was widely condemned by Democrats and Republicans around the nation, including all four living former U.S. presidents.

“I am appalled by the reckless behavior of some political leaders since the election and by the lack of respect shown today for our institutions, our traditions, and our law enforcement,” said former President George W. Bush, a Republican. “The violent assault on the Capitol—and disruption of a Constitutionally-mandated meeting of Congress—was undertaken by people whose passions have been inflamed by falsehoods and false hopes.”

After Biden’s win was finally certified in the wee hours of the morning, Barry C. Black, the Senate chaplain, said a prayer in the chamber that acknowledged the violence.

“These tragedies have reminded us,” he said, “that words matter and that the power of life and death is in the tongue.”

By Thursday morning, calls were growing amid lawmakers and business leaders to impeach President Trump again or invoke the 25th amendment to remove the president on the grounds that he is unable to do his job.

At the same time, Senator Chuck Schumer of New York, the Democratic minority leader who will become the majority leader in a few weeks, tried to reassure Americans shaken by Wednesday’s chaos.

“The divisions in our country clearly run deep, but we are a resilient, forward-looking, and optimistic people, and we will begin the hard work of repairing this nation tonight because here in America we do hard things,” he said on the Senate floor. “In America, we always overcome our challenges.”

With reporting by The New York Times.