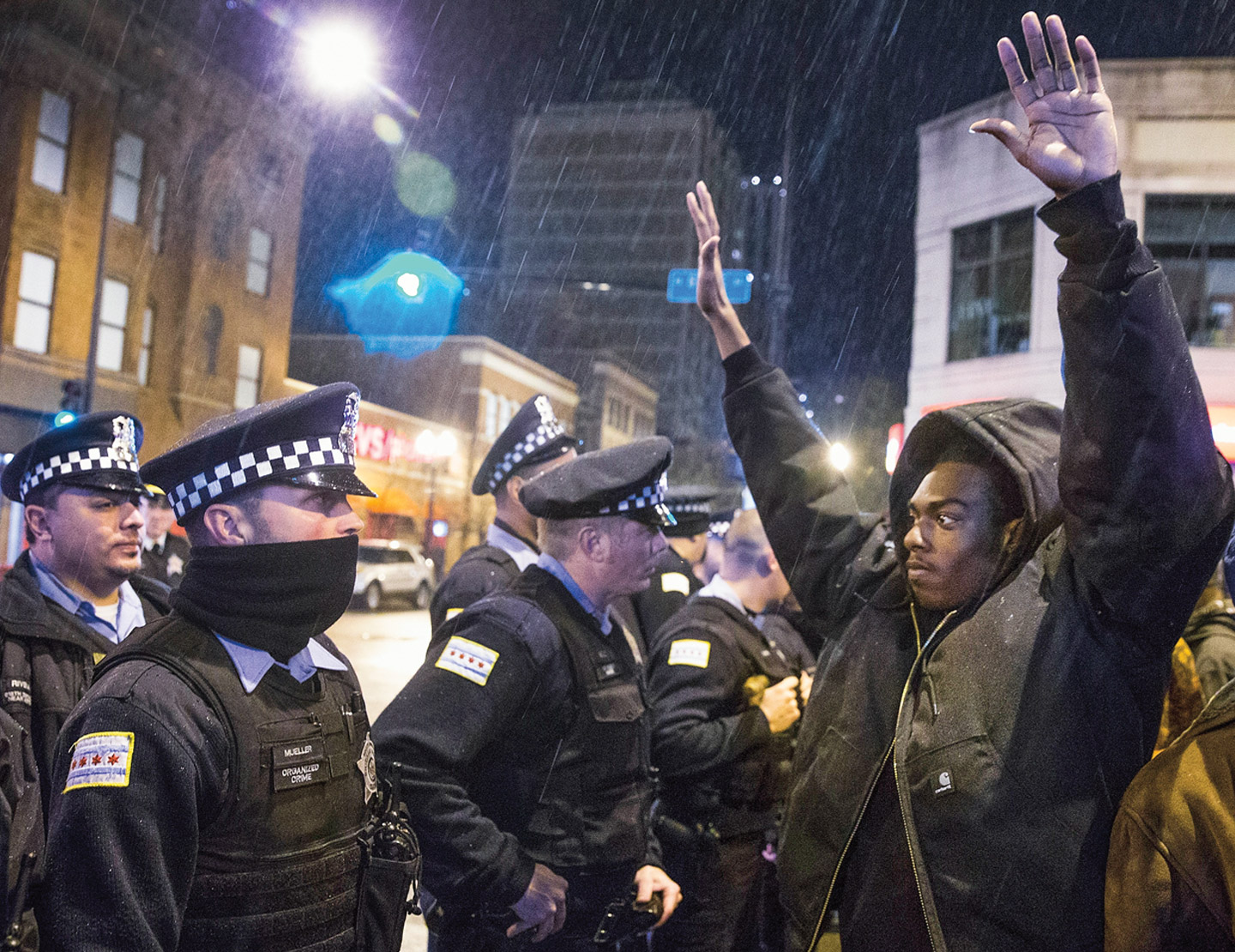 Protesting the death of Laquan McDonald, 17, in Chicago last year, after a video surfaced of police shooting him in 2014

Recent police killings of African-Americans have sparked outrage, protests, and deadly attacks on officers. What can be done to bridge the divide between police and black communities ?

By Jack Healy and Nikole Hannah-Jones

Shanel Berry has raised her two sons, Dallas, 15, and Amari, 11, to be confident and upstanding. She tells them to square their shoulders, look people in the eye, and defend what’s right. But her advice comes with an exception: Do none of those things if stopped by the police.

In that case, she wants her sons to be cautious and just obey any orders the police may give them—even if they feel they were stopped for no reason.

“That is the part Dallas doesn’t quite get,” says Berry, a teacher in Waterloo, Iowa. “[He asks,] ‘Why are you telling me to comply if I am not doing anything wrong?’ I am trying to teach them to be men and stand up for themselves, but at the same time I am telling them to back down and not be who they are.”

Around the country, black parents like Berry report having the same difficult discussion. They coach their kids never to talk back to the police or make sudden movements around them, and to make sure officers can always see their hands. Parents have this talk because they believe some police officers view blacks with suspicion and treat them less fairly than whites. They fear their children may be hurt, or even killed, during encounters with the police.

A string of police killings of African-Americans in recent years has highlighted such fears. The killings made headlines and ignited protests nationwide after many of them were captured on video and widely viewed on social media. Civil rights leaders are calling for police to be held accountable for their actions and for an end to what they say is racial profiling. In response, many police say that they’re being unfairly judged by the actions of a few officers and that snippets of video that go viral on social media don’t always tell the whole story. Some law enforcement officials blame activist movements like Black Lives Matter for a growing anti-police sentiment that they say is making officers’ jobs more dangerous.

Tensions reached a boiling point this past summer. First, on July 5 in Baton Rouge, Louisiana, two police officers shot and killed a black man named Alton Sterling while arresting him outside a store. The next day, an officer fatally shot another black man, Philando Castile, during a traffic stop near St. Paul, Minnesota. (Both Castile and Sterling were carrying guns, and Castile had a license to do so; the details of exactly what led up to each shooting are still under investigation.)

Then, on July 7, during a peaceful march in Dallas, Texas, protesting those shootings, a sniper killed five police officers. Ten days later, three officers in Baton Rouge were killed by a gunman who was targeting police. (The Dallas and Baton Rouge assailants, both black, were killed by police.)

In August, violence broke out in Milwaukee, Wisconsin,  after a police officer fatally shot a black man named Sylville K. Smith who had allegedly fled with a gun during a traffic stop. In the protests that followed, angry crowds injured several officers.

These tragedies mark the latest chapter in an increasingly passionate debate over racial justice, discrimination, and violence in the United States.

“If we cannot talk honestly and openly—not just in the comfort of our own circles, but with those who look different than us or bring a different perspective—then we will never break this dangerous cycle,” President Obama said at a memorial service in Dallas.

The issue of racial bias in policing has been in the national spotlight since August 2014, when an unarmed black teenager named Michael Brown was killed by a white police officer in Ferguson, Missouri. The officer said he shot Brown in self-defense after a struggle. Some witnesses supported the officer’s account; others said Brown posed no threat and the shooting was unjustified.

The officer wasn’t charged with a crime. But a follow-up investigation by the Justice Department found that police in Ferguson routinely discriminated against African-Americans and violated their constitutional rights. Black drivers were often stopped for no reason (a phenomenon many black Americans refer to as “driving while black”) and were much more likely to have their cars searched than whites. When officers used force (such as tasers), nearly 90 percent of the time the suspects were black.

Many black Americans say that this sort of bias isn’t unique to Ferguson. While the vast majority of police encounters with people across the country end peacefully, that’s less likely with African-Americans. “None of this is new,” says Paul Butler, a law professor at Georgetown University in Washington, D.C. “African-Americans have never received equal justice under the law, and police have rarely been held accountable.”

Documenting racial profiling in police work is difficult. Several factors—including higher violent crime rates in many black neighborhoods—make it hard to distinguish evidence of bias from other influences. But federal statistics show that, nationwide, blacks are 31 percent more likely to be pulled over than whites. Studies have also found that blacks are more likely than whites and other groups to be subjected to the use of force by the police. And a recent Washington Post analysis reported that blacks are more than twice as likely as whites to be shot and killed by the police.

This has led many African-Americans to distrust and fear the police. New York City police detective Derick Waller, who is black, understands those feelings. “No officer leaves his house and says, ‘Man, I want to kill somebody today,’” he says. “[But] there is something that’s rooted in America in the police department. It’s just assumed that every black person that has a car with [tinted windows] has a gun.” For his part, Waller says being stopped by a police officer fills him with fear. “When I get pulled over, I get scared. I turn my ignition off, and I put my hands out the window.”

The recent high-profile killings of black men by the police have given growing prominence to the Black Lives Matter movement, which began in 2013 to address discrimination in the criminal justice system. Today, at least 37 different groups operate under the Black Lives Matter name, and tens of thousands of supporters identify with its cause. “Our demand is simple,” says activist Johnetta Elzie of St. Louis, Missouri. “Stop killing us.”

Black Lives Matter uses nonviolent confrontation—such as large-scale street marches—to get its message across. Yet some of its tactics (for example, staging “die-ins” to mimic death at the hands of law enforcement) have prompted criticism from some police and public officials. They say that Black Lives Matter incites hatred of men and women in uniform. Critics have blamed the movement for inspiring the gunmen who killed officers in Dallas and Baton Rouge, even though Black Lives Matter leaders have condemned attacks against the police.

Black Lives Matter supporters say they are not anti-police. “The Black Lives movement is about civil rights,” protester Shyheim Aiken said at a demonstration in New York City. “It’s not about any one group. Those who say the movement is against cops simply don’t know what they’re talking about.”

Still, police report that their jobs have gotten harder in recent months as tensions have risen between them and many of the communities they serve. “Before it was just criminals that didn’t like you,” says a police officer in Florida. “Now everybody believes we’re the bad guy.”

With more than 350 million firearms in the United States, police officers say they face the daily threat of being killed and must make split-second decisions, which can then be endlessly second-guessed in videos that go viral.

“One of the worries that cops have is that no cop can control what another cop does, but all cops will be judged by what the other cop does,” says Brandon del Pozo, a police chief in Vermont. “We’ll sit there . . . watching police videos all over the country, trying to make sense of what we’re seeing and trying to make sure we’re doing the best job we can.”

What happens now? For starters, a growing number of police departments are training officers in how to defuse volatile situations before force becomes necessary. Such training teaches them to use time and distance to resolve tense interactions. (Last year, top American police officials visited Scotland—where 98 percent of police do not carry guns—to learn how officers there handle confrontation.)

The federal government has also funded body cameras for officers in more than 30 states. Proponents of these cameras say that officers will be more mindful of their actions if they know they’re being recorded. In addition, a presidential task force has released ideas for building trust between police and communities. One suggestion is to create citizen advisory boards to provide input and oversight for local police departments. But the pace of change is slow and hostility remains.

Following the violence this summer, Obama invited Black Lives Matter activists and police officials to meet at the White House.

“We still need many in law enforcement to recognize that action needs to happen,” activist Rashad Robinson of the racial justice group Color of Change said afterward. “What we heard was a willingness to listen, which means that we need to continue to raise everyday people’s voices.”

When Police Are on Trial

When someone dies at the hands of law enforcement, officers are rarely found guilty of a crime. Why? The law gives police a lot of discretion over whether deadly force is necessary. A 1989 Supreme Court ruling, Graham v. Connor, says that the use of force by police “must be judged from the perspective of a reasonable officer on the scene, rather than with the 20/20 vision of hindsight.” In other words, if officers can show that they feared for their lives (or the lives of others), the use of force—including deadly force—is unlikely to be considered criminal, even if the victims turn out to be unarmed.

Eric Garner, 43, was stopped by police for allegedly selling loose cigarettes. He died after a police officer placed him in a chokehold.

Michael Brown, 18, was fatally shot by a white police officer after he was stopped for jaywalking and a confrontation ensued. His death sparked nationwide protests.

Alton Sterling, 37, was shot and killed by two police officers while he was being arrested outside a store. The next day, police shot and killed Philando Castile, 32, after pulling him over in his car.