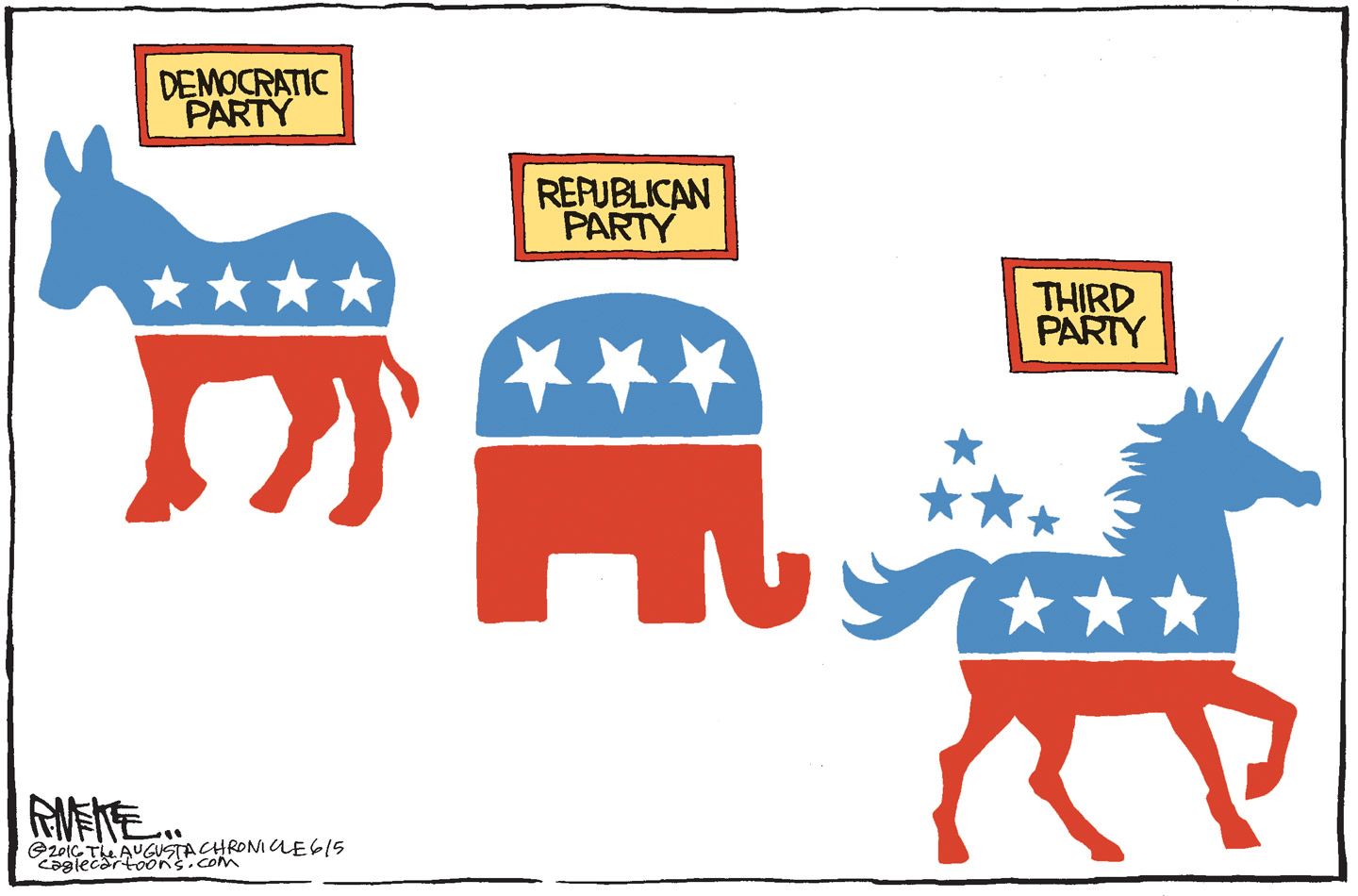 Is It Time for a Third Party?

America’s two-party system makes it hard for third-party candidates to break through. Could this year be different?

Dylan Blair was devastated when Bernie Sanders lost the Democratic primary. Blair isn’t a fan of Democrat Hillary Clinton, so the 23-year-old from Wilder, Vermont, is throwing his support to Jill Stein, the Green Party candidate for president.

“The American people shouldn’t be held hostage to a two-party system and forced to accept the lesser of two evils,” Blair says, explaining his enthusiasm for a third party.

Blair isn’t alone. Dissatisfaction with this year’s major-party nominees, Clinton and Republican Donald Trump, is driving some voters to at least consider voting for a third-party candidate.

With third parties getting little attention from the media, you may be unaware that names besides Clinton’s and Trump’s will appear on the ballot on Election Day. Voters could choose Stein, whose Green Party emphasizes environmental issues. They could support Gary Johnson of the Libertarian Party, which favors smaller government and more individual liberty. They could pick Evan McMullin, a former CIA official who’s running as an independent and wants to give mainstream Republicans an alternative to Trump. And there are other, lesser known candidates.

In fact, third parties have a long history in American politics, but they’re rarely given much chance of winning, which is why the U.S. is said to have a “two-party system.” Third parties, however, can influence elections, and sometimes affect the outcomes (see “Spoiler Alert!” below).

“They do have an impact in the sense that they can drain votes away from one candidate or another and change what might happen in a state,” says William Rosenberg, a political scientist at Drexel University in Philadelphia.

The dominance of two parties traces back to the nation’s beginning. The Founding Fathers disliked the idea of political parties, viewing them as “factions” that would lead to fierce partisan division. But within a few years, two parties—originally the Federalists and the Democratic Republicans—established themselves. Once Americans were used to two major parties, the system stuck. Later, rules were put in place that favor a two-party system.

In the first century of American democracy, there was more flux in terms of which parties dominated. In 1854, when the Republican Party was founded, the major American parties were the Democrats and the Whigs. But the Whigs were already in disarray, and the Republicans entered the political scene with the right issue at the right time: the abolition of slavery. Republican candidate Abraham Lincoln won the 1860 election and his party cemented itself.

“You could say that the last third-party candidate who managed to get elected was Abraham Lincoln,” says Dorothy James, a political scientist at Connecticut College.

Hard to Get on the Ballot

But it’s gotten much harder since then for third parties to break through. The media tend to ignore third-party candidates, so voters rarely see them on TV. They usually lack the big donors that help bankroll Democrats and Republicans (see graphic below), so their campaigns make do with grassroots support and can rarely afford TV ads. Some states make it hard for third-party candidates to even get on the ballot. And they’re usually excluded from televised presidential debates because they don’t meet the threshold of 15 percent support in five recent polls.*

SHOW ME THE MONEY

Third-party candidates have raised little compared with Clinton and Trump

But third-party candidates often raise issues not being discussed by other candidates, and over the long term they can influence Democrats and Republicans to shift their positions to attract more voters. And occasionally third parties have played a spoiler role on Election Day.

The most famous recent example is the impact of Green Party candidate Ralph Nader in the 2000 election. He won just 3 percent of votes nationally, but in Florida, where the race between Democrat Al Gore and Republican George W. Bush was determined by a margin of just 537 votes, Nader won more than 97,000 votes. Without Nader on the ballot, it’s likely that Gore would have won enough Florida votes to swing the state into his column—pushing him over the 270 electoral votes needed to clinch the presidency (see “Electoral College").

This year would seem to offer third parties another opening. According to a recent survey by the Pew Research Center, only 40 percent of Republicans say they’re content with Trump, and only 43 percent of Democrats say they’re satisfied with Clinton—both historic lows for major-party candidates heading into the general election. That helps explain why Johnson, the Libertarian, is polling around 10 percent, and support for Stein, the Green Party candidate, is about 5 percent. (McMullin, the independent, was too new to the race at press time to show up in most polls.)

While these candidates are unlikely to defeat Trump and Clinton, some experts believe that after the election there’s potential for a new major party to emerge. The Republican Party has been intensely divided over Trump’s nomination, leading to speculation that it could splinter.

“Who knows what will happen after November,” says Larry Sabato, director of the Center for Politics at the University of Virginia. “When a major party falls apart and cannot reunify, then inevitably you’re going to have a new major party form. Our system depends on it. We need two strong parties.”

Some key third-party presidential candidates over the past century

After Roosevelt, a two-term Republican president (1901-09), lost the Republican nomination in 1912, he helped found the Progressive Party and ran on that ticket. He won 27 percent of the vote, but drew enough support away from the Republican candidate, William H. Taft, that Democrat Woodrow Wilson won.

George Wallace, the segregationist governor of Alabama, lost the Democratic nomination for president once before he ran as a third-party candidate in 1968. He won five Southern states and 46 electoral votes, but Republican Richard M. Nixon won the election decisively.

Green Party candidate Ralph Nader, who was well known as a consumer-safety advocate, won less than 3 percent of the vote nationwide in 2000. But the race between Democrat Al Gore and Republican George W. Bush was so close that many believe Nader drew critical votes from Gore in Florida—and cost him the election.

George Wallace, the segregationist governor of Alabama, lost the Democratic nomination for president once before he ran as a third-party candidate in 1968. He won five Southern states and 46 electoral votes, but Republican Richard M. Nixon won the election decisively.