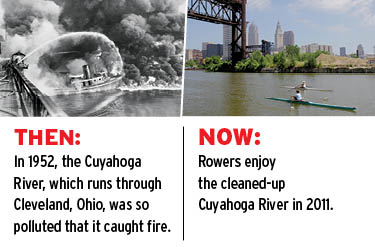 Do We Still Need the EPA?

The Environmental Protection Agency, created in 1970 by President Richard Nixon, is responsible for enforcing environmental regulations passed by Congress. The EPA has the power to fine companies that pollute the nation’s air and water and to regulate carbon emissions that cause climate change.

But some politicians, including President Trump, believe the laws enforced by the EPA stifle economic growth, and that the agency should be scaled back, or even abolished altogether. Environmentalists, however, say the EPA has a key role to play and is as necessary as ever. Here, an environmentalist and a scientist at an organization that promotes limited government square off about the EPA.

Next time your parents or your grandparents tell you about the good old days, tell them they’re wrong—at least when it comes to our environment. Before the Environmental Protection Agency was created in 1970,

air pollution was so thick in some cities that it was hard to see or breathe. Rivers caught fire because of all the pollution in them.

America is dramatically cleaner today. It didn’t happen because companies voluntarily cut pollution; it happened because of strong national environmental laws that were enforced by the EPA.

Every year, rigorous enforcement of the Clean Air Act alone prevents more than 160,000 premature deaths due to heart attacks, lung disease, and other health problems, according to an EPA report. And the value of the benefits—from higher productivity to avoided deaths and fewer sick days—is more than 30 times greater than the costs, according to the EPA. Toxic lead, which harms brain development and causes behavioral problems, has dropped dramatically in our air, in part because of the EPA’s work to remove it from gasoline.

Without federal regulation, pollution would be out of control.

Having national rules from the EPA is critically important. Without federal standards, federal enforcement, and federal support of scientific research, pollution would be out of control. Without the EPA, it would be harder to stop the vast amount of air pollution that crosses state borders, or deal with pollution dumped in rivers, lakes, and oceans that touch many states. What’s more, states would be tempted to lower their pollution standards in the competition to attract companies, rather than having a level playing field with the same high environmental standards enforced nationally.

There’s still much more to be done on lead, air pollution, toxic chemicals, and especially climate change. We need a strong EPA to do those things. We must give the EPA the support it needs to keep our air, water, and climate clean and healthy.

Many large bureaucratic organizations are inefficient, but the EPA is in a class by itself. The EPA is incompetent and wasteful, and it often does more harm than good. It’s time for it to go.

The EPA’s ever-expanding regulations impose huge costs—about $350 billion annually, according to the Competitive Enterprise Institute—on U.S. businesses and, ultimately, on consumers. Many of these regulations are unnecessary. The EPA also misuses taxpayer money, sometimes diverting funds meant for research to things like public relations consultants to burnish its image instead.

Worst of all, the EPA has severely damaged the nation’s competitiveness. Over the decades, the agency has killed off promising innovations in which the U.S. could have been the world’s leader, such as biotech micro-organisms that could clean up toxic waste, including oil spills, and the development of bacteria to protect plants from frost.

Instead, the EPA spends more and more money to address smaller and smaller risks. In one analysis by the federal Office of Management and Budget, of the 30 least cost-effective regulations—in other words, the most wasteful ones throughout the government—the EPA had imposed 17 of them.

The EPA’s functions could be performed by other agencies.

Consider, for example, the EPA’s Superfund program to clean up toxic-waste sites. That may sound like an obviously good idea, but after spending tens of billions of dollars on the program, studies have found few benefits. In fact, an analysis of the hazards of environmental cleanup projects by the University of California Davis found that the risk of fatality to the average cleanup worker—a dump truck driver involved in a collision, for example—is considerably larger than the cancer risks to individual residents that might result from exposure to untreated sites. In other words, EPA’s Superfund program kills more Americans than it protects.

I’m a scientist—both a doctor and a molecular biologist. And I believe that our air and water should be protected from pollution and that the use of pesticides should be regulated. But these essential functions could be performed by other agencies more effectively. It’s time to abolish the EPA.