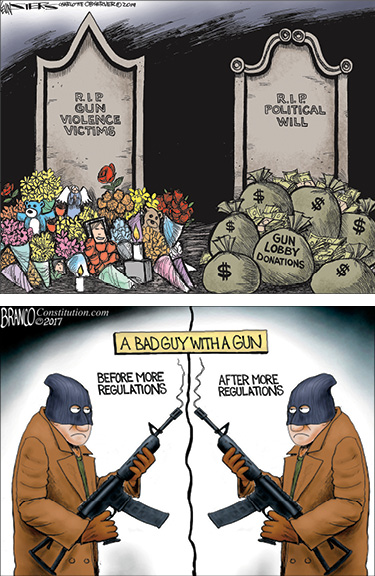 Do We Need Stricter Gun Laws?

On August 3, a 21-year-old armed with an AK-47 rifle walked into a Walmart in El Paso, Texas, and started shooting. He killed 22 people and injured more than two dozen others. Hours later, a man in Dayton, Ohio, killed 9 people and wounded at least 27 with an AR-15 pistol modified so it could fire 41 rounds in less than a minute. Both weapons were purchased legally. The back-to-back mass shootings stunned the nation and prompted new questions about whether the United States needs tougher federal gun laws. Representatives from a gun control group and a gun rights group face off about whether that’s a good idea.

On the same weekend that back-to-back mass shootings in El Paso and Dayton killed 31 people, more than 50 people were shot in various incidents in Chicago.

In fact, according to federal statistics, gun violence in America takes the lives of 100 people and injures 210 more every single day. The only way to stop this epidemic is to enact stronger gun laws.

Many mass shootings are carried out with assault-style weapons capable of inflicting widespread damage. According to a recent Quinnipiac poll, two-thirds of Americans support a ban on assault weapons, similar to the one that was in place from 1994 to 2004, and we should pass one. We also need a ban on high-capacity magazines, which allow shooters to fire more bullets without reloading. And so-called “extreme risk” laws, which allow the removal of firearms from individuals who show signs they might harm themselves or others, would also help reduce gun deaths.

The only way to stop this epidemic of gun violence is to enact stronger gun laws.

Strong gun laws work. California, with some of the strongest gun laws in the country, has cut its gun deaths in half. But strong state laws are undermined by weak laws in neighboring states. The assault weapon used at a shooting in Gilroy, California, in July, was legally purchased in Nevada, a state with weaker gun laws. We need tougher federal laws.

It must become harder for those intent on doing harm to get their hands on any gun, let alone the most deadly weapons of war, which don’t belong on our streets at all. With lives at stake every day in America, we must demand that those elected to represent us pass stronger laws to protect us.

Susan Gonzalez hated guns. She wanted them banned. Then one day in 1997, two masked men broke into her home in Florida. As with most crimes, police could not get there in time to prevent the home invasion. Thankfully, her husband had a gun in the house—despite her objections. Susan grabbed the gun, pulled the trigger, and ended the threat to their lives.

That horrendous attack changed her views on gun control. She credits the gun in their home with saving their lives, and she now carries a gun concealed. She doesn’t want to ever become a victim.

The media usually doesn’t report these kinds of stories. But according to a 2013 federal report, guns are used several thousand times a day by good people to thwart criminal attacks. Consider how law-abiding gun owners have used their firearms to even stop mass murders from taking place in recent years: Last October, a father used his concealed handgun to stop a potential mass shooting in a McDonald’s in Birmingham, Alabama. That same month, a shopper outside a Kroger supermarket in Louisville, Kentucky, used his gun to stop a racist gunman. In 2016, a firefighter used his concealed weapon to stop a shooter who had already wounded a teacher and two students in a South Carolina elementary school.

Gun restrictions only keep good people from protecting themselves.

We don’t need more gun control because no matter what laws get passed, criminals will still get firearms. Or they will use some other tool to kill—such as the man who used a truck to run over and murder 86 people in a 2016 terrorist attack in France.

Gun restrictions only keep honest people from using the best available tool to defend themselves. Such was the case with Kate Nixon of Virginia Beach. She wanted to carry a gun for protection. But the gun control laws in her city prevented her from bringing a gun to work, and she was murdered this past May by the very man against whom she was trying to defend herself.

Guns save lives. But restrictions on firearms keep good people from protecting themselves.

What do you think?
Do We Need Stricter Gun Laws?
Thank you for voting!
Voting has ended. See final results below.
Results
See results Hide results

What does your class think?
Do We Need Stricter Gun Laws?
Thank you for voting!
Voting has ended. See final results below.
Results
See results Hide results