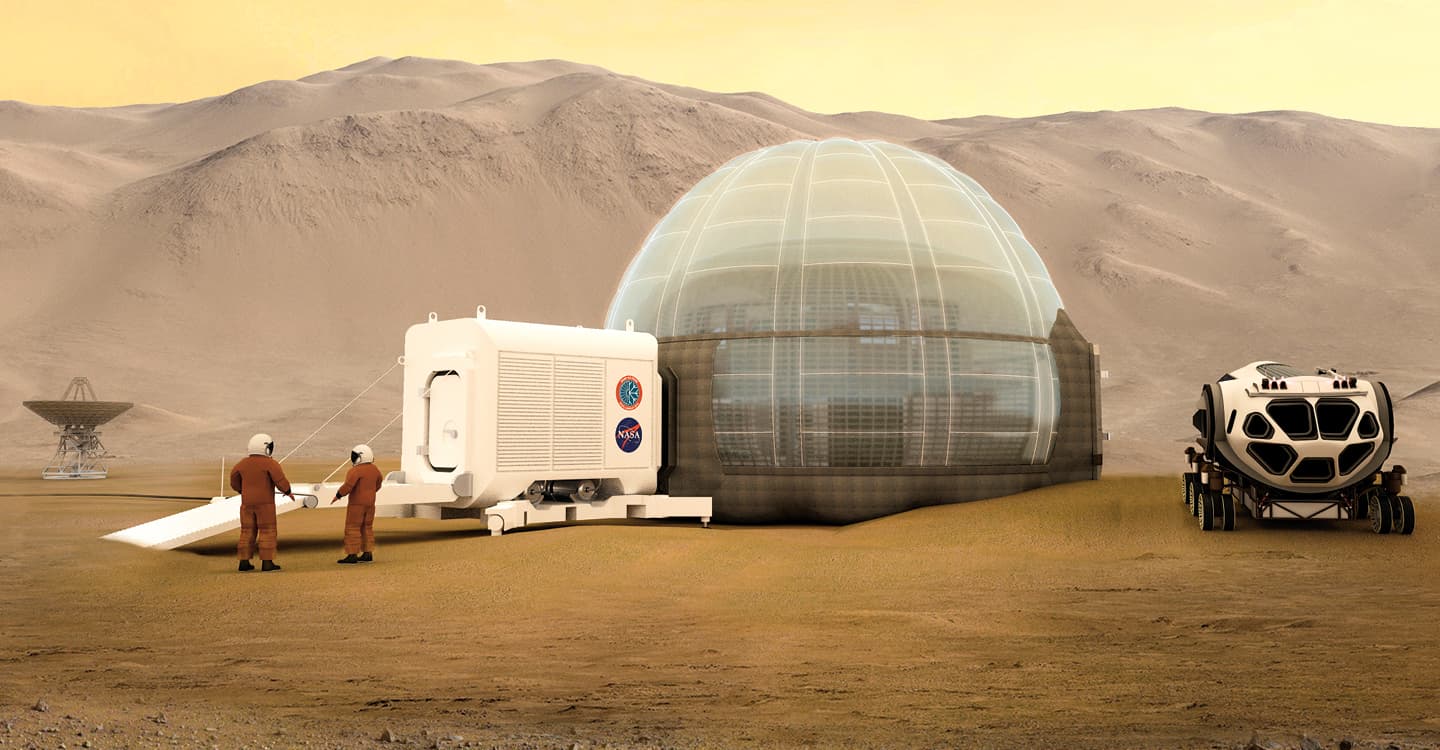 NASA’s vision for living quarters on the Red Planet

Should Humans Go to Mars?

A human mission to Mars once seemed the stuff of science fiction. But thanks to major advancements, reaching—and surviving on—the Red Planet could become a reality in our life-time. NASA, the U.S. space agency, and several private companies are already developing the technology to make such a trip possible.

But while most experts agree that we’ll one day be able to send humans to Mars, not all of them think we should. Two scientists weigh in.

NASA has been sending robots to study and collect information about Mars since 1965. The findings have inspired scientists to continue asking important questions, such as: Did life once exist on Mars? Does it exist there today? Could humans eventually live on Mars? What can the planet tell us about Earth’s past, present, and future?

Many scientists agree that only human explorers can answer these questions. Although robots have been extremely helpful in studying Mars—they discovered ice below the planet’s surface—people will be even better.

For one thing, humans will be able to make quicker decisions, without having to rely on commands from scientists on Earth, like robots do. What can take a rover days and weeks to analyze, a person can study in just hours. Humans will also be able to move around the planet much faster. The Curiosity rover, which is currently exploring Mars, can only travel about the length of a football field in one day.

Humans can move faster than robots and make quicker decisions.

However, getting humans to Mars and keeping them safe will require advances in technology. Not only is Mars very far away, it also lacks breathable air, usable water, and protection from the sun. A round-trip to Mars would take about 18 months, and there isn’t enough room on current spacecraft to carry all the food, water, and other items humans would need to survive. That’s why NASA is looking for ways to utilize the Martian soil and water, as well as other resources.

Exploring space is beneficial for all of us. At NASA, we’re confident that one day humans will be able to travel to Mars, live and work there, and return safely to Earth. It’s just a matter of time.

It’s important to explore Mars, and humans play a valuable role in that research. Though robotic spacecraft can do a lot, they lack the critical intuition, lifetime experience, and decision-making skills that humans have. But sending people to Mars for long periods of time would be extremely unsafe, and we shouldn’t do it.

Space is a very hazardous place for humans. In particular, space radiation—especially galactic cosmic rays (GCRs)—is dangerous. GCRs are energetic particles that come from faraway exploding stars. Without the protection of a thick atmosphere like we have on Earth, these particles can cause cancer and even brain damage. The longer astronauts are in space, both traveling to Mars and on the surface of the planet, the more they’re exposed to these particles and the more damage they’re likely to experience.

Sending people to Mars for long periods would be extremely unsafe.

Luckily, there’s a safer destination for humans in our solar system: Saturn’s moon Titan. Located 745 million miles from Earth, it has a thick atmosphere that provides protection from dangerous radiation. Titan has many other Earth-like qualities that could help us learn more about our home planet. Titan has lakes and seas, as well as wind, weather, and seasons similar to Earth’s, and many resources that would enable humans to build a self-sustaining settlement.

Human exploration of any planet or moon beyond our own is likely to be far in the future. It’s an enormous challenge to get humans safely to these destinations. We should take this giant scientific leap only when we are ready, and we shouldn’t subject our brave astronauts—and the success of the missions—to undue risk. For these reasons and more, sending humans for long-duration missions to Mars would be unwise.

What do you think?
Should Humans Go to Mars?
Thank you for voting!
Voting has ended. See final results below.
Results
See results Hide results

What does your class think?
Should Humans Go to Mars?
Thank you for voting!
Voting has ended. See final results below.
Results
See results Hide results