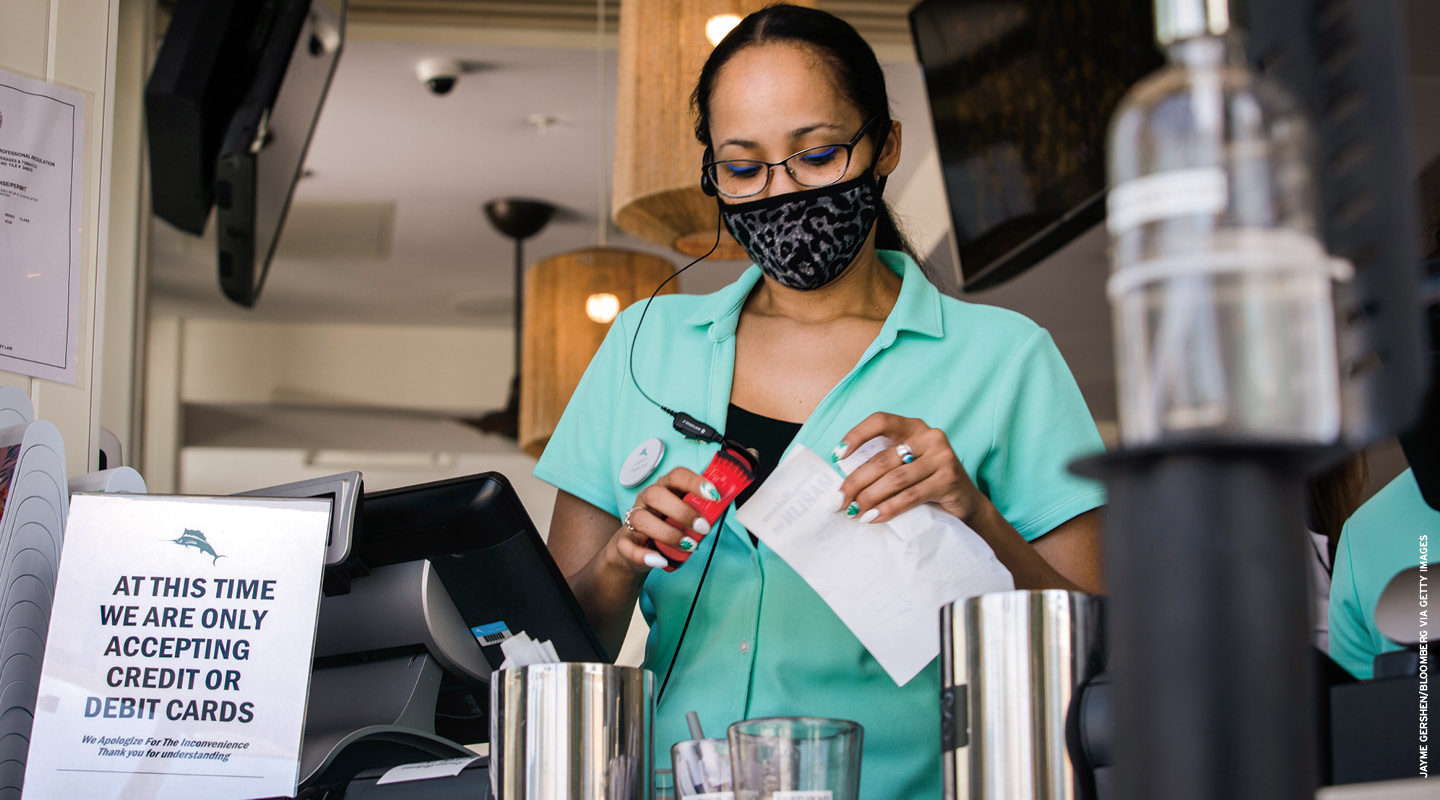 A restaurant in Fort Lauderdale, Florida, that doesn’t accept cash

Should Cashless Businesses Be Banned?

Over the past few years, an increasing number of stores, restaurants, and sports arenas have stopped accepting cash. In response, cities such as New York and Philadelphia and the state of New Jersey have recently enacted bans on cashless businesses. (Massachusetts also requires businesses to accept cash under a law passed almost 40 years ago.) But is banning cashless establishments a good idea? A New York City lawmaker who sponsored the city’s recent cashless ban faces off against an official from a national business organization.

Cash is supposed to be our universal currency. On the front of a dollar bill, it reads: “This note is legal tender for all debts, public and private.” Despite these words, there has been a growing wave of businesses recently that refuse to accept cash, opting instead to accept only credit or debit payments. This is not acceptable.

Consider what cashless businesses mean for the millions of Americans who are “unbanked”—who don’t have bank accounts, much less access to credit or debit cards. According to the Federal Deposit Insurance Corporation, 6.5 percent of Americans were unbanked as of 2017 and another 18.7 percent were “underbanked,” meaning they lacked access to most traditional banking services. Cashless businesses have the effect of discriminating against these Americans, keeping them from freely buying goods and services in an increasingly digital marketplace.

Beyond discriminating against the unbanked, cashless businesses ignore the preferences of consumers who, on principle, choose cash over credit and debit. Some consumers prefer cash for the sake of privacy: Unlike cashless transactions, paying with cash doesn’t leave them vulnerable to data breaches and identity theft. Some prefer cash for the sake of fiscal restraint: Consumers exercise greater restraint with cash than with credit or debit. And others, especially senior citizens, choose cash simply because it’s familiar to them.

A ban on cashless businesses isn’t a ban on technological progress; it’s an affirmation of consumer choice. Cashless payment can and should be one option among many, but it should never be the sole option.

Not everyone has access to credit or debit, but all of us have access to cash, and some of us prefer to use it. Mandating the universal acceptance of cash through a ban on cashless businesses is critical to maintaining an inclusive marketplace that respects both the needs of the unbanked and the preferences of consumers.

Banning cashless stores is a solution in search of a problem. No major national retail chain has gone cashless, and most examples are small, independent retailers, mostly restaurants. The two most prominent names that have tried cashless—Sweetgreen and Amazon Go—relented amid complaints from customers. Some retailers actually prefer cash because of the tens of billions of dollars banks charge annually to process credit card transactions.

Nonetheless, the world is changing. Cash was used for 40 percent of payments in 2012, but that share dropped to 30 percent by 2017, according to the Federal Reserve. The use of plastic has soared, along with mobile payments.

For “digitally native” high schoolers, paying by phone—or maybe by fingerprint or facial recognition someday soon—is as natural as swiping cards for their parents or handing over cash for their grandparents. Young people under 25 already use debit cards for 35 percent of transactions, and college campuses are one place where going cashless has taken off, from dining halls that accept only a student ID to bookstores or campus shops that no longer take cash.

Going cashless can have benefits for businesses and for customers.

With new technical innovations in the works, everyone—poor and wealthy alike—will soon be able to pay digitally even if they don’t have a bank account or credit card.

Opting to go cashless can have other benefits for businesses: It can reduce risks of robbery since there’s no cash to steal. It can also eliminate the problem of employees skimming from the till. What’s more, workers can be freed up from counting bills and coins and from making bank deposits.

Proponents also argue that plastic is more convenient for consumers and that checkout lines move faster when clerks don’t have to make change for customers.