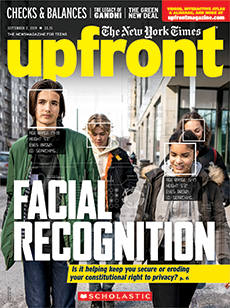 Access this article and hundreds more like it with a FREE TRIAL to Upfront magazine. No obligation or credit card is required.

The Dallas Cowboys in Tempe, Arizona, on Monday

On Sunday and Monday, in football games across the country, dozens of pro players knelt or locked arms during the singing of the national anthem. On three other teams, nearly all the players refused to take the field until the song was over.

The wave of defiance on the sidelines of the country’s most popular sport was fueled by a speech President Donald Trump gave on September 22. At a campaign rally in Huntsville, Alabama, he called for the National Football League (NFL) to fire players who refuse to stand for the national anthem.

Trump was referring to football protests that started last year when Colin Kaepernick, then a quarterback for the San Francisco 49ers, began kneeling during the anthem. (See “Star Spangled Protest.”) Kaepernick said it was to draw attention to police brutality and racial injustice. (Kaepernick, a free agent, is not currently playing in the NFL.)

Until recently, just a handful of African American players had protested during the anthem this football season. After Trump’s Alabama speech, however, athletes nationwide joined in protesting the president’s words.

The issue of kneeling during the anthem has sparked intense debate—on and off the field. Advocates of free speech argue that professional athletes have the right to use their positions of influence to call attention to social issues that are important to them. But others say refusing to stand for the anthem disrespects the nation, the military, and the flag—and that sports is no place for such displays.

In recent days, Trump has repeatedly criticized the NFL on Twitter, calling for a boycott of the league and for teams to ban their players from kneeling during the anthem.

As the majority of players kneeling are African-American, some people argued that Trump’s criticism had to do with race. But Trump has denied that, tweeting:  “The issue of kneeling has nothing to do with race. It is about respect for our country, flag, and national anthem. NFL must respect this!”

Yet even some of the president’s most loyal supporters in the NFL—including several team owners—joined the protests or condemned the president for divisiveness.

Robert Kraft, the owner of the New England Patriots and a friend of Trump’s, said he was disappointed by the president’s comments.

“Our players are intelligent, thoughtful, and care deeply about their community, and I support their right to peacefully effect social change and raise awareness in a manner they feel is most impactful,” he said.

On September 25, before a game against the Arizona Cardinals, the Dallas Cowboys and team owner Jerry Jones took the field and knelt before the national anthem. They were both cheered and booed by the crowd. Then both the Cowboys and Cardinals stood and linked arms during the anthem in a dramatic display of team unity.

Will the anthem protests continue throughout the season? So far, the demonstrations have generated mixed reactions from fans. While some applauded the athletes’ actions, other fans said they prefer to simply watch football.

Outside the stadium in East Rutherford on Sunday, Julie Santomero said she did not want to see protests at a sporting event because she and her family attend games to get away from politics.