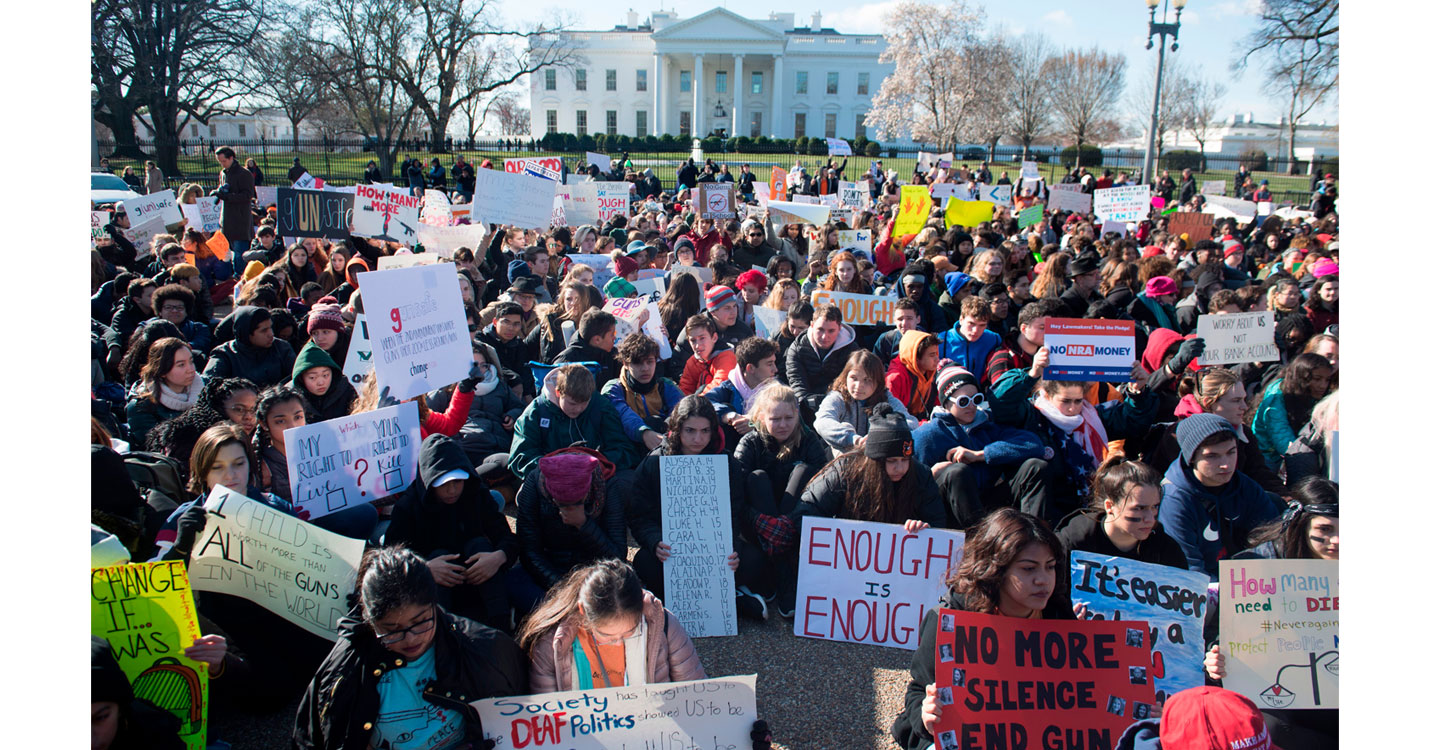 Thousands of Washington, D.C.-area students protest at the White House as part of a nationwide student walkout.

Students Across the U.S. Protest Against Gun Violence

By Alan Blinder and Julie Turkewitz

Tens of thousands of students, emboldened by a growing protest movement over gun violence, stood up in their classrooms on Wednesday and walked out of their schools in a nationwide demonstration, one month after a gunman killed 17 people at Marjory Stoneman Douglas High School in Parkland, Florida.

The protests—which lasted 17 minutes, one minute for each of the victims—were intended to pressure Congress to approve gun control legislation in the aftermath of the Florida massacre. The nationwide school walkouts are taking place 10 days before a march on Washington is planned for March 24 to continue pressing lawmakers for action on guns and school safety.

Just hours after the walkouts began, Nikolas Cruz, the 19-year-old accused of carrying out the shooting at Stoneman Douglas, was scheduled to appear in a Florida courtroom. Prosecutors said Tuesday they intend to seek the death penalty against Cruz.

On Wednesday, the first large wave of students began to leave their classrooms at 10 a.m. Eastern time. Across the country, others were scheduled to walk out at 10 a.m. in their local time zones.

“Students don’t get to voice their opinion very often and it’s thrilling to be one of the millions across the United States who will have that option,” says Katie Cummins, a high school student in Louisville, Kentucky, about why she participated in the walkout. “The students at Stoneman Douglas who have spoken out and become activists are incredibly inspiring.”

‘Cause Some Good Trouble’

Just hours before the walkouts began, Stoneman Douglas senior Delaney Tarr tweeted encouragement to student activists across the country: “You have such a STRONG voice. Keep using it. Keep marching. Keep walking out. Cause some good trouble.”

In Littleton, Colorado, students at Columbine High School left their classrooms to begin 30 seconds of silence: 17 for the dead in Parkland and another 13 for those killed at their own school in the 1999 shooting that marked the beginning of a generation of school attacks.

Students from two nearby high schools also walked out in solidarity. Sam Craig, 15, a student at Chatfield High School in Littleton, said he was motivated to act after watching the videos coming out of Parkland.

“We saw people in classrooms just like ours, wearing clothes just like ours, they looked like they could have been any one of us at any of our schools,” he said. “And seeing them lying in pools of blood was really powerful for us.”

Students in New York City during the walkout

'A Threat to Student Safety’?

Across the country, school administrators grappled with how to respond. Some districts have welcomed or even tacitly encouraged walkouts, while others have threatened disciplinary action against students who participate.

“We cannot condone students leaving classes during the instructional day to participate in this activity,” said Barbara P. Canavan, the schools superintendent in Harford County, Maryland. She said the protest “presents, paradoxically, a threat to student safety, as word of the walkout has been widely disseminated and students who go outside could become more vulnerable.”

In Sayreville, New Jersey, where students have been threatened with suspension if they walk out, the president of the school board, Kevin Ciak, said last month that “if we decide that we open this door, we open this door to allow students to basically walk out and protest anything.”

The American Civil Liberties Union, which offered training to students planning to participate in the walkouts, said that districts can discipline students under attendance guidelines.

“But what they can’t do,” the A.C.L.U. wrote in a guide for student protesters, “is discipline you more harshly because of the political nature of or the message behind your action.” Many colleges, meanwhile, have said that high school students disciplined for protesting will not have it counted against them when they apply for admission.

In other districts, administrators helped students organize and carry out the walkouts.

In Newtown, Conn., where 26 people were killed at Sandy Hook Elementary School in 2012, hundreds of students filed out of Newtown High School just moments before 10 a.m. and gathered in a parking lot near the football field. Some held posters. Organizers said they planned to recite the names of victims of gun violence. The district’s interim superintendent, Lorrie Rodrigue, said that school officials had “worked closely with student leaders to create a time for respectful student expression.” Rodrigue said she viewed the protests as an extension of social studies classes.

On Monday, President Donald Trump seemed to retreat from his earlier pledge to seek national-level reforms that the National Rifle Association (N.R.A.) opposed. There has been some action on the state level, however. Last week, Florida raised the minimum age to purchase a firearm to 21 and extended the waiting period to three days. The N.R.A. has sued Florida over the age requirement, saying it violates the Second Amendment.

For more on student activism in the aftermath of the Stoneman Douglas shooting, click here.

1) What are some of the reasons students give for participating in the walkout?

2) What message do you think young people were trying to send and to whom?

3) How did school districts react to the walkout and why?

4) What did Katie Cummins mean when she said, “Students don’t get to voice their opinions very often”?