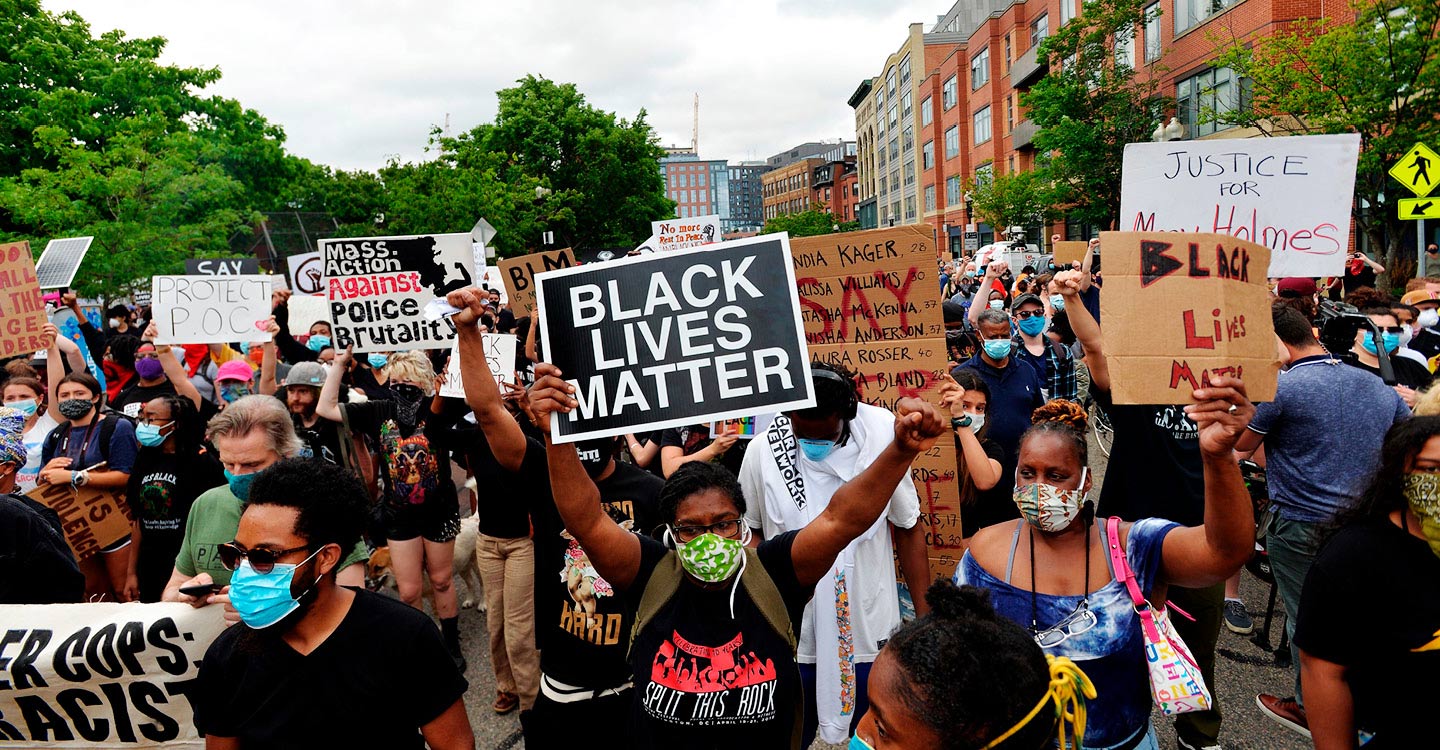 Marching in Boston to protest the death of George Floyd

The death of George Floyd, an African American man, in police custody on May 25 has prompted protests in every state in the country. The protesters are demanding an end to the long history of police violence against black people in the United States.

Floyd, a 46-year-old security guard who’d been laid off amid the Covid-19 lockdowns, died after he was handcuffed and pinned to the ground by a white police officer. The officer’s knee remained pressing on his neck for eight minutes as Floyd repeatedly complained that he couldn’t breathe. Floyd had been accused of using a counterfeit $20 to buy a pack of cigarettes at a convenience store. The incident was filmed by bystanders on their phones and quickly posted on social media. The footage sparked outrage across the country.

Floyd’s death came on the heels of public fury over the killing of Ahmaud Arbery, a black man who was shot while jogging in a white neighborhood near Brunswick, Georgia, after he was confronted by a white former police officer and his son. In March, Breonna Taylor, a black emergency room technician, was shot by police in her home in Louisville, Kentucky, in the middle of the night as officers broke down her door to serve a warrant; she wasn't a suspect in the case they were investigating.

The four arresting police officers involved in the Floyd incident were fired, and Derek Chauvin, the officer whose knee was on Floyd’s neck, was charged several days later with third-degree murder and second-degree manslaughter. The charge was later upgraded to second-degree murder. And the three other officers were also later charged with aiding and abetting murder.

But that did not do enough to stop people from taking to the streets and demanding more significant changes to policing in the U.S.

Most of the thousands of protesters have marched peacefully. In cities across the country, from Los Angeles to Chicago to New York, they’ve carried signs that read “Black Lives Matter;” they’ve chanted and tried to make their voices heard. The protests have spread around the world, including such places as England, Germany, and Brazil.

Kayla JuNaye Johnson, 21, a student majoring in criminal justice at Grambling State University, a historically black public university in Louisiana, participated in the protests in Minneapolis over the weekend.

“May 27, 2020, changed my life forever,” said Johnson, referring to the date Floyd was killed. “I would always go out and support protests but never took full action like I did yesterday. I stood on the front line shouting, ‘Hands up, don’t shoot.’ Now I finally know how us African Americans felt during the civil rights movement. I am a part of history.”

Demonstrators in Atlanta included this woman overcome with emotion

In some cities, police forces tried to display solidarity with their communities. In Petersburg, Virginia, Chief Kenneth Miller and a handful of police officers appeared alongside protesters. And in Oklahoma City on Sunday, as a crowd of marchers seemed to grow tense, officers with the sheriff’s department’s tactical team took a knee in a pose popularized by the former N.F.L. quarterback Colin Kaepernick. The protesters cheered.

But for several days, violence spread in many cities after dark, leading many mayors to impose curfews. People have set fires outside the White House. Stores in New York City, Santa Monica, California, and other cities across the country have been broken into. And many areas have experienced widespread damage. Videos have shown police officers using batons, tear gas, and rubber bullets on protesters, bystanders, and journalists, sometimes without warning or seemingly unprovoked.

The upheaval following Floyd’s death came as many Americans were already ragged with anger and anxiety. Emotions are raw over the toll of a pandemic that has killed more than 100,000 people across the country and destroyed millions of jobs.

The outbreak has inflicted disproportionate economic and health tolls on racial minorities and immigrants. Black and Latino workers have been more likely to have lost their jobs. Many others are among the low-paid hourly workers who risk their health by going to work at grocery stores, nursing homes, factories, slaughterhouses, and other jobs that can't be done remotely. The nationwide protests have brought thousands of people out of their homes and onto the streets, and some public health experts fear that might lead to a new surge in Covid-19 cases. Many people think the economic pain and misery from the public health lockdowns have added to the volatile atmosphere.

“They’re restless,” Minnesota’s attorney general Keith Ellison says of the people protesting. “Some of them have been unemployed, some of them don’t have rent money, and they’re angry, they’re frustrated.”

President Trump has taken a hard line against the protesters, and lawmakers and officials from both parties have criticized his divisive tone. He endured particularly harsh criticism for using the military police to clear peaceful protesters who were gathered across from the White House.

But other politicians have tried to call for calm and seize the moment to inspire positive change.

“I don’t think we get another chance to fix this in the country, I really don’t,” Minnesota Governor Tim Walz said Wednesday. “I don’t think that's hyperbole. I think being at the heart of this and seeing the community’s pain so viscerally, this is . . . this is going to have to be that change we look for.”

With reporting by The New York Times.